More than 40 years ago local farmer, Claire Scheibe and his family had a small side business on their farm, S&S Antiques. When the farming chores allowed, he and his wife Cathy would pack up their four children in a white Dodge Van and head off for antique shows in Valley City, Fargo and Sioux Falls to set up, display and sell items they had bought at local auctions.

Claire really liked the old toys and he always had a box of well-played-with “sand box” toys for sale under the table at these shows. Eventually he had the opportunity to meet people from the Ertl Company who made most of these toys. He began to buy some of the company’s surplus stock and also gain a lot of the history of farm toys. Each month he would create a list of what he had for sale and send it to people who were interested in buying. These price sheets precipitated many calls from collectors interested in learning what he knew about the Ertl toys.

At Cathy’s suggestion Claire decided to locally print a small monthly newsletter and The Toy Farmer, was born with 17 of Claire’s customers signing up. From this humble beginning the company grew to include the publishing of a monthly magazine and to add another Magazine, Toy Trucker & Contractor. Currently the circulation of these two magazines is nearly 20,000.

Many other endeavors added to the company’s success such as: The National Farm Toy Show, The National Toy Truck ‘N Construction Show and The North Dakota Farm Toy Show. Through the years the company has had hundreds of different models made for these shows and other independent offerings for collectors.

The business is located on the home farm, four miles east and two miles south of LaMoure. The Toy Farmer Museum is housed in a converted historic barn at the same location. The museum, which tells the Toy Farmer story, houses most of everything the company has produced as well as several other Claire Scheibe collections. Museum closed Spring 2020.

Toy Farmer is a local company that reaches collectors throughout the world. We have subscribers or customers in all 50 states and many foreign countries. Our websites have more than 6,000 visitors monthly from over 50 different countries. 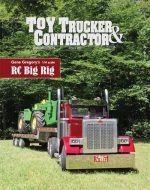 In 1982 Gary Anderson of Mora, Minn. visited the Toy Farmer offices and tried to convince its editor, Claire Scheibe to publish a newsletter about American toy trucks. Toy Farmer was just beginning to manufacture some farm toy implements and Claire felt they didn’t have the time to add another publication so he encouraged Gary to start up that phase of the hobby. Gary and his wife Connie published The American Toy Trucker, from 1982 until 1986 when they sold it to Marge and Dennis Lowry of Des Moines, Iowa. The publication came full circle when Claire and Cathy Scheibe purchased it from the Lowry’s in 1990. The Scheibes changed the name to Toy Trucker & Contractor and changed the format from a black and white newsletter to a full color magazine. Today thousands of subscribers worldwide enjoy this monthly magazine.